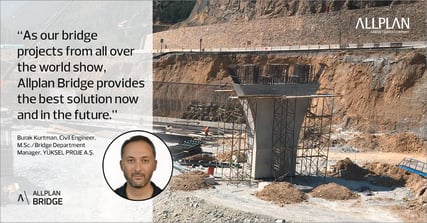 Mr. Kurtman from the Bridge Department of Yüksel Proje is telling a story from the time company started to use Allplan Bridge to completing their first BIM project. Well optimized teamwork supported through our solution has helped this team of experts to finalize some truly great projects.

Burak Kurtman has graduated from Civil Engineering Department of Middle East Technical University of Turkey in 2003. He has completed his master’s degree in structural engineering from Middle East Technical University in 2007. He worked various steel and concrete structure designs between 2004 and 2007. He has been working as a bridge engineer in Yüksel Proje since 2008. He has worked in the design of various concrete and steel bridges such as cable stayed, balanced cantilever, incremental launched and arch bridges during his career.

View the webinar for free